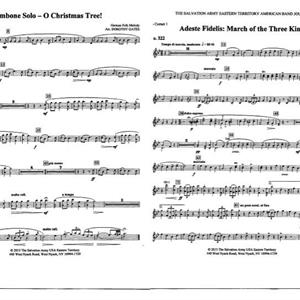 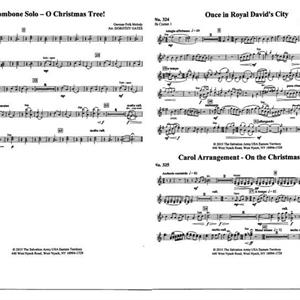 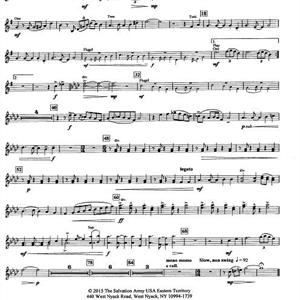 Between 1874 and 1876 Franz Liszt, the great 19th-century pianist and composer, wrote a 12 movement Christmas Tree Suite , which he released in two volumes of six pieces each. Liszt published the suite for solo piano and for piano duet. He also orchestrated several movements for larger forces. Adeste Fidelis: March of the Three Kings appears as the 4th number in Volume 1 and is typical of the short character piece that flourished in the hands of the Romantics. Liszt combines his own original march music in minor mode with the familiar Latin carol known in English as 'O Come, All Ye Faithful'. The work starts softly, perhaps intentionally mysterious, but gradually builds in volume, and then in tempo, for a celebratory finish, the Wise Men perhaps rejoicing in their arrival at Bethlehem.

The trombone solo, 'O Christmas Tree', was written at the request of Bandmaster Ronald Waiksnoris. He specifically requested a slow gentle version. This is indeed a slow, gentle arrangement of the well-known carol. May the gentle sonorities and movement fill your heart with peace.

This is a well-known Christmas Carol in Germany entitled, 'Am Weihnachtsbaum die Lichter Brennen'. It is very light and festive.

'We Three Kings' was written shortly after the passing of Jazz legend, Dave Brubeck in December 2012. Brubeck was known for his experimentation in different meters including 'Blue Rondo a la Turk', 'Unsquare dance', and most famously 'Take Five' on which this arrangement is stylized. The trombones take the haunting melody of the popular carol, 'We Three Kings' into a groovy 5/4 swing rhythm.

Ej i lager / Out of stock